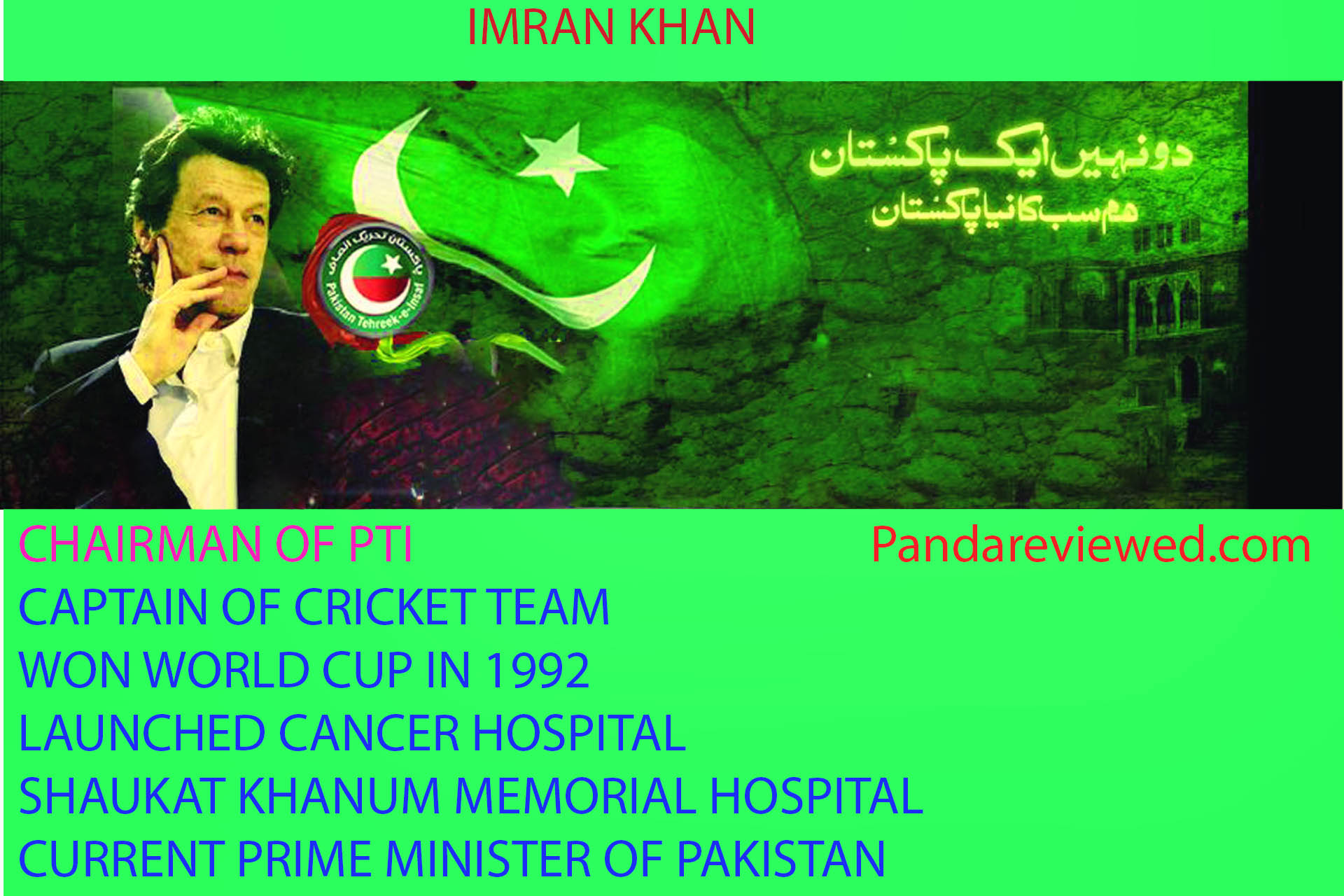 THE LEGEND PRIME MINISTER OF PAKISTAN

Imran khan was born and grown up in Pashtun family Pathan in Lahore in 1952. He done his study from Keble collage Oxford university in 1975.

His complete name is Imran Ahmed khan Niazi born in Pathan family 5 October 1952. He is 22nd and current prime minister of Pakistan. Before minister he was Chairman of the Pakistan Tehreek-e- Insaaf (PTI).

What IMRAN KHAN BEFORE JOIN POLITICS?

In 1991 he was launched fund raising campaign to set up a cancer hospital in memory of his mother.

He was raised and completed that hospital in Lahore with cost of total rupees 25$ million in 1994. After he opened second same hospital in Peshawar in 2015.

Khan also continued his efforts and raised and opened lots of memorable organisations like:

Khan also served as the chancellor of the university of Bradford in 2005 to 2014. He was also a member and recipient of the honour followship by the Royal Collage of physician in 2012.

IMRAN KHAN was a Chairman of the PTI he got and winning the seat in National Assembly in 2002. PTI became a second largest party by popular votes. PTI led a second highest party from all over national government in Khyber Pakhtunkhwa from 2013. After this delegating leadership to Mahmood khan, he was after being elected for as prime minister of Pakistan in 2018.

In 2018 he got seat of prime minister of Pakistan. As prime minister khan addressed BOP (Balance of Payment) with crises of bailout from international monetary fund. He was also presided over current account deficit and limiting defense spending to curtail the fiscal deficit also. Pakistan’s economy also gets great recovering under Imran khans’ leadership. Through Domestic policy khan also start an anti-corruption campaign but later he was too criticized by political opponents for illegal targeting. Second Domestic policy khan also pushed a for increase in renewal energy production he also pushed increase in non-renewal energy sources from

His solid aim to make a Pakistan began to be a most powerful and renewable country in 2030. He also initiated and constructed and build up loss of projects

His big motive and aim to reforms to made Pakistan are a social safety net. In foreign policy he made border skirmishes against India want to support Afghan peace process especially. And made best relations with China and Russia and with United State.

Some Controversies about IMRAN KHAN:

Ayesha Gulalai alleged Imran khan of harassing her by khan and claimed that she got and receiving offensive messages from him from August 1, 2017 to since October 2013. But after that Ayesha Gulalai gave statement that she definitely forgave khan if he apologizes to her.

In 1994, he was joined the group led to by the former ISI Inter-Services Intelligence under chief Hamid Gul and Muhammad Ali Durrani who was Head of Pasbaan. Breakaway youth wing Jamaat-e-Islamic Pakistan.

After that IMRAN KHAN founded his own personal political party named Tahreek-e-Insaaf on 25 April 1996.

In national Assembly of Pakistan, he got winning seat through elected voted and became to be a candidate of PTI in 1997.

In 1999, khan was supported to General Pervez Musharraf in military coup he believed that he finally ended corruption.

2002, he offered by Musharraf as ministerial of Pakistan but khan turned down the offer.

In 2007, khan joined parliament with other 85 MPs they all resign from elections.

After that 30 October 2011 khan addressed lots of candidates specially youth wings in Lahore and later in Karachi, he challenging policies of Government.

PRIME MINISTER OF PAKISTAN IN 2018:

Finally, he was declared an honorable and respectful Person as Prime Minister of Pakistan in May 2018.