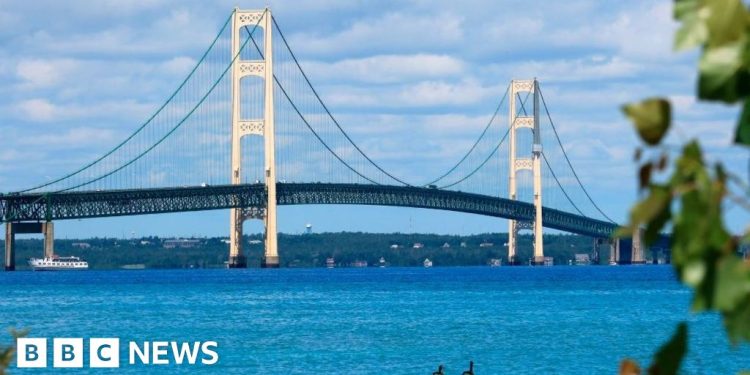 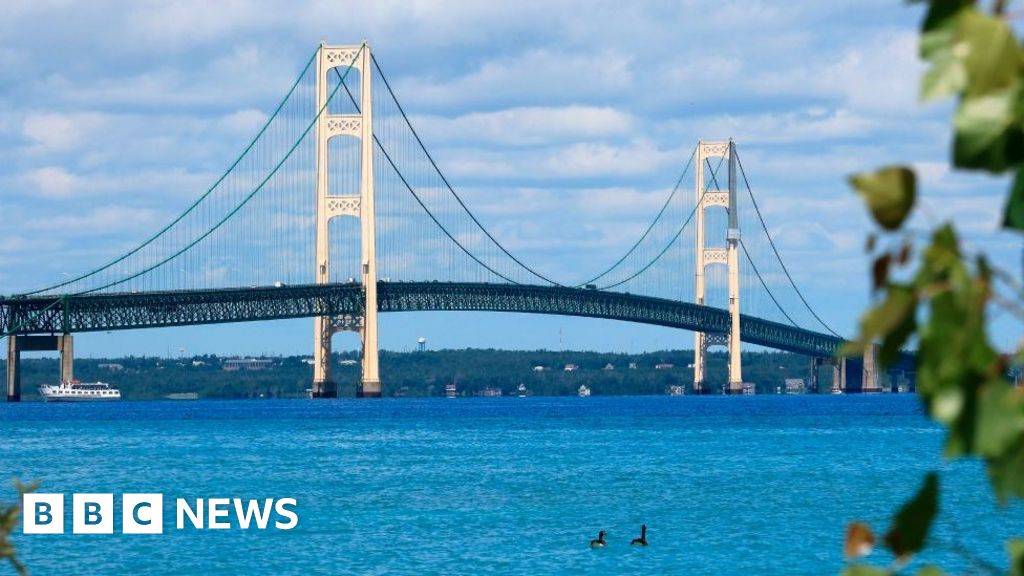 An ageing pipeline crossing part of the Great Lakes has led to a standoff between the US state of Michigan and Canada. The outcome of the battle over Line 5, which delivers energy to the US Midwest and central Canada, will be viewed by many as a bellwether of how North America will balance its energy future with its environmental commitments.

The most contentious part of the Line 5 pipeline – which runs from Superior, Wisconsin, by way of Michigan to Sarnia, Canada – sits on the bed of the Straits of Mackinac. The narrow waterway connects Lake Michigan and Lake Huron – two of the world’s largest lakes.

In 2018, an anchor from a shipping freighter passing through the Straits struck and damaged the pipe, bringing to the fore longstanding concerns from environmental campaigners and others over possible spills.

Then-Michigan Governor Rick Snyder made an agreement with Canadian pipeline operator Enbridge to protect the pipeline from further damage and keep it operational. Enbridge, one of the world’s largest pipeline firms, would build a $500m (£411m) tunnel bored through rock below the lakebed in the Straits, to enclose Line 5.

The agreement was meant to end uncertainty about the controversial 69-year-old oil and natural gas pipeline’s safety.

Will Line 5 be shut down?

But two years later, Governor Gretchen Whitmer, Mr Snyder’s Democratic successor and a long-time opponent of Line 5, ordered the company to cease operations in the Straits, effectively shutting Line 5 down. She called it an “unreasonable risk” to the Great Lakes, one of the largest sources of fresh water in the world and an economic engine for the region.

Now, there is no end in sight for the ongoing battle over the fate of the project, the pipeline and the need to protect the Great Lakes.

Permits and a safety and environmental impact assessment for the project – which would take years to complete – are still pending. And Enbridge has ignored Gov Whitmer’s order to halt, setting things up for a lengthy and contentious court battle.

Enbridge says the pipeline, which earns it an estimated $1.6-$2m daily, has been operating safely and reliably in the Straits for decades.

In turn, Michigan has sued the company to enforce the Line 5 shutdown. The case is currently before a US federal court.

Calgary-based Enbridge has Canada in its corner.

Line 5 is part of the Lakehead System, a network of pipelines that brings oil and natural gas from western Canada to homes and refineries in Michigan, Ohio, Pennsylvania, Ontario and Quebec.

It provides the majority of the Canadian provinces of Ontario and Quebec’s crude oil and, fearing its closure, Ottawa – which has warned a shutdown would have a profound impact on both sides of the border, including on jobs and supply chains – backed Enbridge’s legal case. It invoked the 1977 Transit Pipelines Treaty between the two countries.

The treaty ensures that crude oil will flow between the US and Canada so long as the pipelines involved are compliant with various rules and regulations. It forces an arbitration process in the event of a dispute.

But Michigan has the support of 12 federally recognised Anishinaabe tribes in the state, who say Line 5 poses too high a risk to the Great Lakes.

The waters are also of spiritual importance for the tribes, who argue they are protected by their constitutional treaty rights.

“The Straits of Mackinac are the centre of our creation story,” explains the President of the Bay Mills Indian Community, Whitney Gravelle.

She said they have a right to hunt, fish and gather in the territory “in perpetuity – and Line 5 is a ticking time bomb that could destroy our culture and lifeways”.

For many Michiganders it is a vital fuel supply – their main source of heating, delivering 55% of the state’s propane needs, according to Enbridge.

Dan Harrington is the owner of UP Propane, a major supplier of propane used for heating in Michigan’s Upper Peninsula, north of the Straits of Mackinac.

Over concerns the pipeline would be shut down, he arranged an alternative supply route so as not to let down his 17,000 customers.

“We actually put in a rail terminal where we aren’t getting any, or very little, of our propane from Line 5,” says Harrington.

But if it were shut down, “the Midwest would be in a world of hurt”, he said.

While Enbridge says the Great Lakes tunnel project would “virtually eliminate” the chance of a spill, others disagree.

An independent pipeline safety expert hired by the Bay Mills Indian Community, Richard Kuprewicz, says that transporting oil and gas “through an enclosed tunnel enhances the risk of a catastrophic explosion” – a risk he called low but not “negligible”.

If there was a pipeline break, even in the best-case scenario the outcome would be disastrous, according to Great Lakes oceanographer Dave Schwab.

“So even if the oil flow was stopped instantly, which is impossible, the pipe would still contain a minimum of 5,000 barrels of oil,” he said.

A “best-case scenario” could see 700km (435 miles) of shoreline along Lake Huron and Lake Michigan affected, he said, and “in the worst case of a 25,000 barrel spill, over 1,000km of shoreline in both Canada and America would be affected”.

According to an independent risk analysis commissioned by Michigan, an oil spill could cost almost $2bn in damages. Given the diversity of habitats in and around the Straits – home to many insects, fish and migratory birds – it may “represent a point of no return for species loss”.

Michigan has been looking at options to replace Line 5 that include adding pumping stations to increase the flow of other Enbridge pipelines, or transporting the product via trucks and railroads. Those options, Canada’s Minister for Natural Resources Jonathan Wilkinson told the BBC, were “less safe, less efficient, and higher emitting”.

Pipelines are generally regarded as a safe way to transport fuel and a better alternative to tanker trucks or freight trains.

Supporters argue Line 5 is critical to the state for the millions of dollars Enbridge pays in property, corporate and other tax revenues annually, and is vital to its energy needs.

Enbridge says there’s no viable alternative to the tunnel project and that they intend to continue operating Line 5 at the Straits until the tunnel’s completion.

“The tunnel makes what has always been a safe pipeline even safer, ensuring energy access and reliability, and supporting jobs and the economy throughout the Great Lakes Region,” it told the BBC in an emailed statement.

They said they had also taken additional measures to regularly monitor its integrity and prevent future anchor strikes.

Although Line 5 has spilled over one million gallons at other stretches of the pipeline over its lifetime, Enbridge states that the portion crossing Mackinac “remains in excellent condition and has never experienced a leak”.

So far, the Biden administration has kept at arm’s length from the dispute, saying it will allow current environmental reviews of the tunnel project to play out.

But Heather Exner-Pirot, a Senior Fellow at the Macdonald-Laurier Institute, a Canadian think-tank, believes Mr Biden is unlikely to allow Line 5 to close, especially in the wake of Russia’s invasion of Ukraine, which has had a significant impact on global energy supply and markets.

“The energy crisis has caused the political tides to turn on this,” said Ms Pirot.

This will dismay both environmentalists and tribes, who assert that Line 5 is contrary to the Biden administration’s green energy commitments.

“Enbridge is speaking the universal language of economics,” says Liz Kirkwood of FLOW, a non-profit conservation group, referring to the firm’s warnings that a shutdown would have immediate consequences on the economies in the region.

“What we’re talking about is 20% of the planet’s fresh surface water and the identity of an entire region. This is our home.”

Editor’s note: Leana Hosea was arrested in 2017 while working as a journalist covering a protest against Enbridge’s Line 3 pipeline in Wisconsin. All criminal charges were dropped.