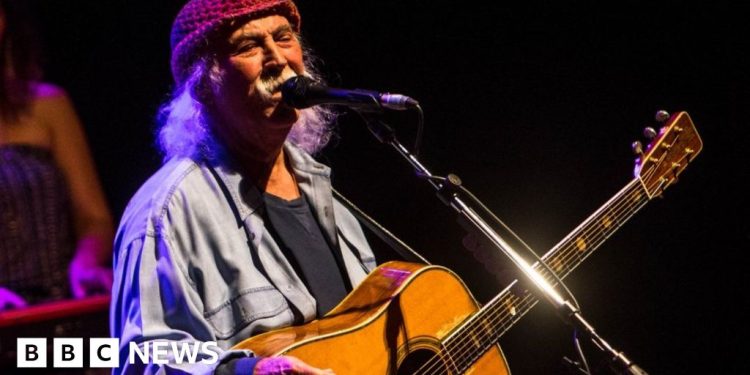 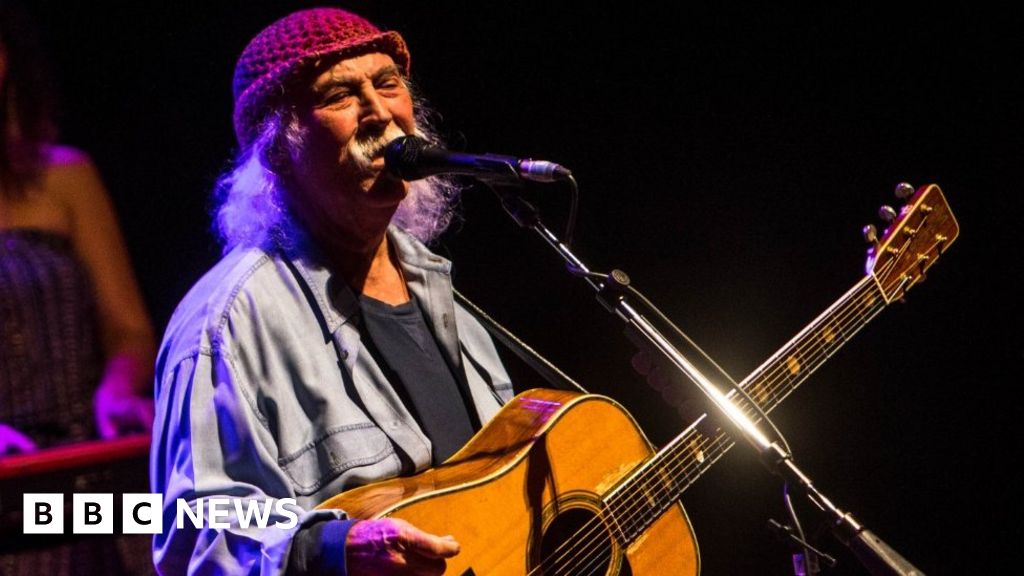 Veteran US folk-rock star David Crosby has died aged 81, his representative has confirmed.

He helped set up two major bands in the 1960s: The Byrds, and Crosby, Stills and Nash. He was renowned for his guitar-playing and vocal harmonies.

His career saw him achieve the rare feat of being inducted to the revered Rock and Roll Hall of Fame twice.

Former bandmates saluted Crosby’s creative talents, while acknowledging the conflicts they had endured.

Crosby’s wife told showbiz site Variety that he died “after a long illness” while surrounded by family.

“His legacy will continue to live on through his legendary music,” her statement added.

Crosby was born in California on 14 August 1941, the son of Oscar-winning Hollywood cinematographer Floyd Crosby.

He joined The Byrds in 1964 – a folk-rock group who scored their first hit with a cover of Bob Dylan’s Tambourine Man, and whose other singles like Turn! Turn! Turn! and Eight Miles High helped change the face of American pop and rock.

His tempestuous tenure – a period during which he also briefly dated singer Joni Mitchell – culminated in his being fired from the group three years later.

Crosby, Stills, Nash and Young made one of their first appearances at the Woodstock in 1969, and later had a hit with Mitchell’s song about the legendary festival.

This band, too, was beset by in-fighting and broke up after a few years – although they have periodically reformed for concerts since.

Hits written by Crosby during his time in the band included the hippy anthems Almost Cut My Hair and Deja Vu, and he responded to the 1968 assassination of Robert Kennedy with the song Long Time Gone.

He became known for his countercultural politics and trademark moustache as well as his musicianship. A six-decade career culminated in his final album, For Free, released in 2021.

The record saw him team up with one of his children, James Raymond, who had been put up for adoption soon after birth and only became acquainted with his father three decades later.

Off-stage, Crosby had multiple run-ins with US law enforcement, including an arrest in 1982 on drug and weapons charges.

His substance abuse had reportedly intensified after the death of a girlfriend in a car crash when he was a young man.

There followed periods of ill health, and a liver transplant in 1994. Crosby’s reputation for a hedonistic lifestyle saw him named two decades later as “rock’s unlikeliest survivor” by Rolling Stone magazine.

‘A giant of a musician’

Crosby later expressed regret over his addictions and altercations with co-stars, telling the Los Angeles Times in 2019 he was “ashamed” of some of his past behaviours.

“What has always mattered to David and me more than anything was the pure joy of the music we created together, the sound we discovered with one another, and the deep friendship we shared over all these many long years,” Nash wrote.

“David was fearless in life and in music.”

Stills agreed, writing that his late collaborator was “without question a giant of a musician”, even though they had “butted heads a lot of the time”.

“His harmonic sensibilities were nothing short of genius,” he added.

Another tribute came from Beach Boys singer Brian Wilson, who wrote on Twitter that he was “heartbroken” at the news – as his fellow star had been an “unbelievable talent” and a “wonderful person”.

Crosby helped fellow singer Melissa Etheridge and her partner have two children by acting as their sperm donor through artificial insemination. Etheridge wrote on Thursday: “He gave me the gift of family. I will forever be grateful to him, Django, and Jan.

“His music and legacy will inspire many generations to come. A true treasure.”

Crosby, Etheridge and their respective partners revealed his involvement through an appearance together with the two young children on the cover of Rolling Stone magazine in 2000.

Asked why she chose Crosby, Etheridge told the magazine: “He’s musical, which means a lot to me, and I admire his work.”

In 2016, she said she had considered Brad Pitt, a good friend, as the donor, but decided against it because of the actor’s desire to have a family of his own.

“I looked and I saw how badly he wanted children and I thought, I don’t want to share this with someone who really, badly wants children because my children don’t need another parent – they have two,” she told Australia’s Studio 10.

Etheridge’s family saw Crosby “every once in a while”, she said, but Crosby and his wife Jan “totally understood that we are the parents”.

One of the children they conceived, Beckett Cypher, died in 2020 at the age of 21. Etheridge tweeted at the time that she “joined the hundreds of thousands of families who have lost loved ones to opioid addiction“.

Crosby said in 2021 that Beckett’s death was “hugely painful”. He told The Telegraph: “It’s never gonna get easy. You lose somebody you love and it hurts, that’s how it is.”

Etheridge told The Guardian later that year that Crosby blamed himself for Beckett’s addiction, thinking it might be genetic.

“But he can’t. Everybody has choices. You can’t just say: ‘Oh, that’s David Crosby’s son, so…’ That doesn’t work at all.”

Crosby and his wife also helped actress Drew Barrymore by letting her stay with them for three months as part of her programme of recovery from alcohol and drug abuse when she was 14 in 1989.

“I’m an old Hollywood kid, and I knew her story,” Crosby said at the time. “I felt she had been dealt a short deck, you know, a fifth-generation alcoholic, and I didn’t want to see her go down the tubes.”

RIP David Crosby. As a member of The Byrds, 1 of the historically essential Artists that created the Artform of Rock. The Byrds, Bob Dylan, Beatles, Stones, Kinks, Who, Beach Boys & Yardbirds, showed future generations like us what was possible. We owe him, and them, everything.

I can’t begin to say how influential Crosby, Stills and Nash were for me. I’m grateful David Crosby lived, and so very sad he’s gone.

Tweets were sent from Crosby’s own account the day before his death was announced – with one stating that Eleanor Rigby was his favourite Beatles to song to play on a rainy day.

The exact cause of his death was not immediately specified.

THE LARGEST EARTHQUAKES IN HUALIEN COUNTY